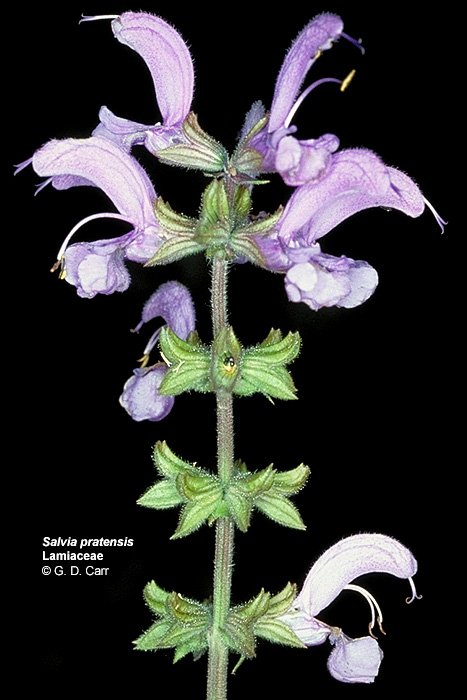 Salvia divinorum is a perennial herb in the mint family. Of the nearly 1000 known species of Salvia, the most recently discovered is Salvia divinorum. Salvia divinorum is known both for its hallucinogenic properties and its unique botanical traits. The history of salvia was first encountered by Western scientists in 1939, but the secrecy of the indigenous people who introduced salvia to scientists made classification impossible until 1962.

The Salvia divinorum plant grows over a meter tall, with leaves that reach up to 30 centimeters long. In it’s native habitat, salvia blooms from September to May, when exposure to the sun is less than 12 hours, but blooming specimens are rare. The flowers are curved and white, averaging 3 centimeters in diameter. The delicate flowers bloom in clusters, radiating around shoots growing from the main branch. Originally, salvia flowers were mistakenly documented as blue. This error was the result of observing dried specimens, it was corrected when live plants made their way to scientists in the United States.

In nature, salvia is unique to the Sierra Mazateca region of Oaxaca, Mexico. It is found beneath the persistent fog of tropical evergreen forests at an elevation between 300 and 1800 meters. The common growing condition for salvia is in black soil along stream banks, near trees and bushes that create a low light, high humidity environment. It has also been found thriving in similar conditions in coffee plantations.

Producing Salvia divinorum seeds is exceedingly difficult. Salvia seeds have only ever been observed in cultivated plants, and even then, few viable seeds are ever produced. The lack of sexual reproduction in Salvia divinorum is due to reduced pollen fertility. The likely cause for this is either a degradation in the plant from the inbreeding of extensive cultivation, or possibly that salvia is a hybrid and suffers from the fertility problems associated with most hybrids. One candidate for hybrid progenation is Salvia cyanea, but as of yet, this has possibility has not been tested. In 2010 a study involving hereditary analysis using DNA sequencing established some evidence indicating that salvia’s infertility is most likely caused long-term cultivation, but there is still no conclusive findings. Salvia divinorum is one of three Salvia species whose origins are unknown.

While sexual reproduction is rare, it readily reproduces vegetatively. The detached nodes and internodes of salvia stems from a mother plant easily establish roots in the span of two or three weeks. The reproduction of Salvia divinorum is mostly driven by semi-cultivation. In the Mazatec region, the natives, who place great value on the plant, care for local salvia populations, insuring their reproduction and protecting them from outsiders. The vast majority of salvia plants observed in the wild are clones from a handful of original plants.

About fifteen strains of salvia have been found in the wild, and two strains are most common in Western cultivation. The first strain is descended from the original live plant received as a gift from a Mazatec shaman to Sterling Bunnell in 1962. The other existing strain was collected in 1991 by anthropologist Bret Blosser. Nearly all salvia plant material available in the Western world comes from one of these two strains.

Botanists consider Salvia divinorum to be an interesting plant because of its unique physical characteristics and unidentifiable origin, but perhaps more interesting is the devout and secretive cultivation that has kept the species flourishing. The Mazatec devotion to this plant is certainly tied to the singular psychoactive properties it possesses. Salvia divinorum’s incredible traits have earned it a place of permanent interest in both Western culture and science.

Salvia for sale is available for purchase in our online store.