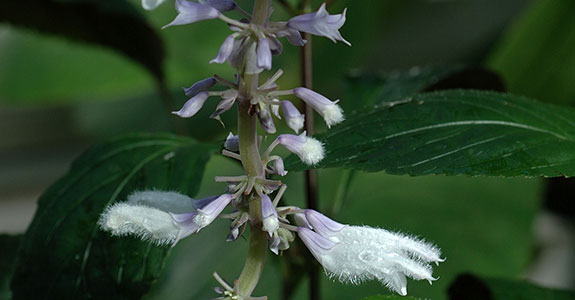 History of Salvia divinorum began in the late 1990’s, tied to commercial availability via the Internet, but the history of salvia may span hundreds of years or more.

Anthropologists and ethnobotanists began observing and experimenting with salvia in the 1900’s. Some experts proposed that salvia might actually be the drug referred to by the Aztecs as pipizizintli. The use of entheogens in Aztecan culture is widely documented. Aztec priests used psychoactive plants for healing, vision interpretation, and prophecy. Most of the psychoactive plants have been identified, but the true identity of pipizizintli is still unknown. Many people believe that Salvia divinorum is pipizizintli. There is some evidence to support this, although the issue is far from settled. If salvia is in fact the ancient Aztecan entheogen, the use of salvia may date back to at least the 13th century.

Salvia’s Debut In The Western World

Salvia was first mentioned in print in 1939 by anthropologist Jean Basset Johnson, who was studying Mazatec shamanism. The Mazatec shamans consumed salvia in a liquid preparation as a part of healing rituals. Johnson also experimented with salvia on himself and recorded his experiences. Throughout the first half of the 1900’s, salvia was documented by several anthropological and ethnobotanical researchers visiting Mexico and Central America.

The first live salvia plants were brought to the United States by psychiatrist Sterling Bunnell. Bunnell originally travelled to the Sierra Mazateca to collect psilocybin mushrooms in the spring of 1962. He returned in the fall of the same year with his newlywed wife and was given a live plant by the shaman Isauro Nave. He began cultivating salvia at home from that plant. Bunnell gave a live plant to Carl Epling of the University of California at Berkley, an expert on the mint family (Labiatae), to which salvia belongs. Epling contributed a salvia plant to the UCLA Berkley Botanical Garden. Bunnell also gave a salvia plant to to Alexander Shulgin, who famously experimented with and meticulously documented hundreds of psychoactive drugs. Salvia is propagated from clippings, rather than from pollination, so new plants are in fact clones of their parent. The Salvia divinorum strain originally grown by Sterling Bunnell is the most widely cultivated and commonly available strain of salvia.

The first person to send plant material to Carl Epling was Robert Gordon Wasson. Wasson also travelled to Mexico seeking psilocybin mushrooms. On regular visits to Mexico between 1955 and 1962, Wasson encountered salvia occasionally and sent back samples when he could. In 1961 he was finally able to ingest salvia and describe his experience. In 1962, he finally sent samples to Epling that were suitable for classification, and at this time Epling and his colleagues recognized Wasson’s plant as a new species and named it Salvia divinorum. Wasson contributed some important observations to the body of knowledge about salvia. In particular, he documented that Mazateca cultivation of the plant is secret and guarded from outsiders. Although he saw freshly harvested samples, he was not allowed to see the remote ravines in which they were grown. Wasson saw that salvia is indeed a cultigen. It may occur in the wild, but he did not observe it growing wildly and the plants used by native Mexicans in rituals were definitely cultivated. It was Wasson who first proposed that Salvia divinorum might be pipizizintli, although this suggestion was tentative.

Research and observation of salvia divinorum continued in the second half of the 1900’s. Researchers made little progress in identifying the exact psychoactive mechanism of salvia, or in understanding how it works in the brain. During this time, smoking salvia as a method of ingestion, as opposed to the traditional method of drinking a liquid preparation, began to rise. In 1994, the compound salvinorin A was identified in the 1994 by ethnobotanist Daniel Siebert as the psychoactive element of salvia divinorum. Siebert has studied Salvia divinorum for over twenty years and is one of the leading contemporary experts. In a 2002 study, headed by B.L. Roth, it was discovered that salvia acts by selectively inhibiting (3)H-bremazocine binding to cloned kappa opioid receptors. In other words, salvia is a kappa-opioid agonist. This makes Salvia divinorum unique, as most classical hallucinogens, such as LSD, mescaline and DMT are serotonergic agonists. The finding is significant, because it poses the possibility that salvia may have therapeutic use in treating diseases such as schizophrenia and dementia, which are manifested by perceptual distortions.

Besides being pharmacologically unique, Salvia divinorum has been the subject of some unique research methods. Scientists at San Diego State University conducted the first drug-behavioral research involving YouTube by studying videos of salvia use. In the San Diego State University study, a sample of videos was taken from the thousands of videos on YouTube documenting Salvia divinorum trips. The sample was then filtered to contain only videos that documented the entire hallucinogenic experience, without any video edits. Research assistants were trained to watch the videos and documented the observed effects in thirty second intervals. Prior to screening the videos, forty-two different effects were listed for the three assistants to watch for. This study not only contributed to the body of knowledge regarding Salvia divinorum, but the Salvia divinorum helped the scientific community in pioneering new methods and exploring the feasibility and shortcomings of using non-clinical settings and YouTube in assessing emerging drugs and drug effects.

The rise of the Internet has been instrumental in bringing Salvia divinorum out of hidden Mexican ravines and into the world of mainstream hallucinogenic experimenters. In the decades before the Internet, salvia was not as accessible or well known as other hallucinogenics such as LSD and psilocybin mushrooms. Thanks to the Internet, information about salvia divinorum has become more widely distributed, and the plant has taken its place among the traditionally more popular hallucinogens for people embarking on psychedelic exploration. Electronic commerce has also contributed to the accessibility of salvia for sale. Because the legality of Salvia divinorum is nebulous, it has been possible to easily obtain either plant material or extract from e-commerce websites.
The use of psychedelic entheogens by human beings is as old as the human race itself. It is not known for certain how long humans have been using Salvia divinorum. Clearly, salvia has been regarded as a sacred plant by the Mazatec shamans, and very likely by cultures before them. Modern science has shown that Salvia divinorum is a tremendously unique psychoactive plant, and modern technology has woven itself into the culture of this entheogen in a way unlike the interaction between technology and any other hallucinogen. Today, people from all around the globe are using Salvia divinorum to connect with the ancient rite of psychedelic experience. Governments around the world have changed laws in order to prevent people from experiencing Salvia.

Sources for this piece: