Home » Mitragyna Speciosa: Could This Be the Answer to America’s Opioid Epidemic? 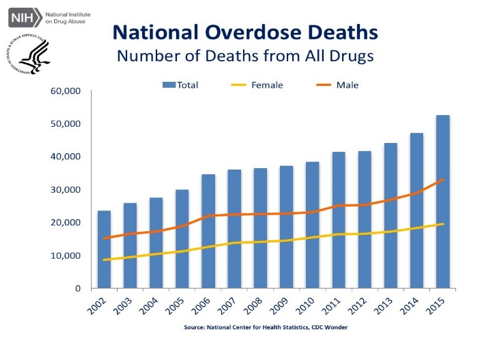 As the pharmaceutical companies continue to push narcotics onto Americans, the rate for addiction and death has almost tripled over the last decade. According to the World Drug Report in 2012, “It is estimated that between 26.4 million and 36 million people abuse opioids worldwide,1 with an estimated 2.1 million people in the United States suffering from substance abuse disorders related to prescription opioid pain relievers in 2012 and an estimated 467,000 addicted to heroin.”2 According to the National Center for Health Statistics, the number of overdose deaths involving opioids rose from 28,647 in 2014 to 33,091 in 2015.3

The total number of opioid pain relievers prescribed in the United States has skyrocketed in the past 25 years. The number of prescriptions for opioids (like hydrocodone and oxycodone products) have escalated from around 76 million in 1991 to nearly 207 million in 2013, with the United States their biggest consumer globally, accounting for almost 100 percent of the world total for hydrocodone (e.g., Vicodin) and 81 percent for oxycodone (e.g., Percocet).4

Recently, the DEA and FDA began working together to crack down on the amount of opiates distributed in America by physicians and pharmaceutical companies; such as hydrocodone, oxycontin and morphine. “Fourteen billion opioid pills are now dispensed annually in the United States – enough for every adult American to have a bottle of pills. Certainly, the pharmaceutical industry is at fault for decades of misleading information about their products and the medical community bears responsibility for its role in over-prescribing these dangerous and addictive drugs, but we remain deeply troubled by the sheer volume of opioids available – volumes that are approved by DEA.”5

Kratom Is a Surprising Answer to This Terrifying Dilemma

Kratom is neither a drug nor an opiate. It is a deciduous tree that grows natively in Southeast Asia and has been used for its healing properties for centuries. The leaves of the plant contain dozens of alkaloids that can produce both stimulation and sedation as well as euphoria in those that ingest it. 7-hydroxymitragynine and Mitragynine are the most active alkaloids contained within the herb and are believed to be responsible for most of the effects that it produces.  Mitragynine (the most plentiful alkaloid) is an opioid agonist, meaning that it is drawn toward the opioid receptors in the brain. In the brain of an addict, those opiate receptors begin to ‘cry out’, so to speak, for that drug. Kratom’s unique alkaloid 7-hydroxymitragynine bind to those needy receptors and ease the withdrawal symptoms by tricking the brain into thinking it has found its fix.

The effects can be felt in as little as ten minutes and can last six hours or more, depending on the type of Kratom and how much was taken.  Kratom will not produce extremely strong euphoric feelings like opiates do, but it can soothe an opiate addiction successfully, and is a much safer and healthier alternative to methadone or suboxone.

All Kratom types affect the opioid receptors in some way and can provide relief from withdrawal symptoms.  The most popular choice for addicts are the red vein strains due to their sedating and strong pain-relieving qualities. At high doses, almost any type of Kratom will provide sedation, however the red strains are generally better suited for withdrawal symptoms.  White vein Thai, Red vein Borneo, Red vein Thai and Red vein Malay are all popular strains for this purpose.7

When using Kratom for opiate withdrawals, it is important to remember to monitor your dosing closely. Using Kratom for this purpose will require a higher dose than someone who was just using it to enhance their mood or treat mild pain.  While Kratom is not addictive, it can be habit forming.  In larger quantities, kratom can cause ill effects; such as nausea, vomiting, headaches and dizziness. Do not use more than recommended. Below is the general Kratom dosing guide.  Most Kratom users reach their desired effects in the mild and moderate ranges, however a heavy opiate user may need to use doses in the strong and very strong range to ease their withdrawals.  This, of course, is determined by the quantity and type of narcotics the person is used to consuming, their body composition, the strain of Kratom and other unique variables.  It is always safest to use the smallest amount of Kratom to ease your symptoms.  As time passes, you can lower your dose and use Kratom more sporadically.7

The above table represents an ‘average’ amongst Kratom users and should only be used as a guide. Results vary from person to person and from plant to plant based on many factors8

Other articles that may interest you