Mitragyna speciosa is the scientific name of Kratom, a well-known tropical tree with a long history of traditional use in many parts of Africa, Southeast Asia, the Phillipines and New Guinea1,2. Kratom is a 4-16 meter high tree that belongs to the Rubiaceae or coffee family1,2 and is also known as Thom, Thang, Biak, Kakuam, Mambog, Ithang, and Ketum3,4 and there are different varieties of it with various stimulant, opioid or other effects5.  The most known varieties of Kratom that are sold on the internet are: Bali Kratom, Malaysian Kratom, red, green or white vein Thai kratom, Maeng Da Kratom, white-veined Borneo Kratom, New Guinea Kratom, Java Kratom, Sumatra red, the Rifat strain, the bumblebee strain, and red and green Riau6.

Traditionally, in some Southeast Asian regions, the leaves of the tree were either chopped fresh or used dried and were used either for chewing or for tea preparation so as labor workers to combat fatigue and to become more productive7. Furthermore, it has long been used by people in Thailand or Malaya as a painkiller and opioid8. Nowadays, Kratom is actually consumed throughout the world for its stimulant effects and as an opioid substitute (in form of tea, chewed, smoked, in form of powder mixed with chocolate, milk or other ingredients or even ingested in the form of capsules).

Several case studies have associated Kratom exposure with psychosis, seizures9, hepatotoxicity10, pulmonary and kidney injury11, cardiac12 or thyroid13 injury, other medical conditions, and deaths14. According to a recent study2 that analyzed one of the strongest varieties of Kratom, Maeng Da (Thai)15, different Kratom preparations may contain varying amounts of several phytochemicals, making their pharmacological and toxicological evaluation unique and difficult  (see Fig. 1). 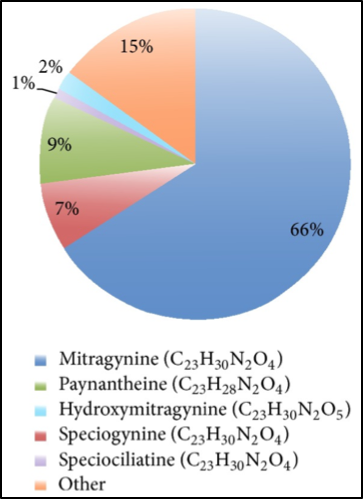 Figure 1: An estimate of Thai kratom extract composition. The phytochemicals isolated from various parts of the tree include overall 40 structurally related alkaloids as well as several flavonoids, terpenoid saponins, polyphenols, and various glycosides2.

The debated effects of Kratom consumption

However, the clinical manifestations of Kratom effects are not well defined and the clinical studies are limited. Research data and many blogs and forums15-21 suggest that both positive and negative effects of Kratom exist.  The positive symptoms, according to some users include feeling relaxed, energetic, sociable, and euphoric. Other reports suggest that kratom increases sensory perception and users experience no pain22. On the other hand, the negative symptoms are mostly described as side effects or withdrawal symptoms that users mentioned. These effects are stomach ache, nausea and vomiting22, dry mouth, polyuria, anorexia, weight loss and frequent constipation7, tiredness and a loss of appetite23, and psychological symptoms such as hostility, aggression, anxiety, depressed mood, dysphoria, moodiness, annoyance, restlessness, visual alterations and unsteadiness24, low sexual drive, and irritability25, in addition to some other symptoms reported such as inability to work, muscle and bone pain, and jerky movements of the limbs7, and cold symptoms such as chills and sneeze. Some users also report symptoms like sweats, dizziness, vomiting, itching, mouth and throat numbness, and sedation24. One of the very characteristic cultural syndromes called the “rain panic,” which is of greatest concern for regular kratom users is the sense of frozen into the bone with muscle pain, joint aches, cough, sneezing, and trembling and was described by Saingam et al25.

More research on Kratom would reveal its benefits and its dangers

It is important to note that mortalities after Kratom consumption have been reported to occur in individuals with blood mitragynine concentrations between 0.45 and 1.0 μM26. Thus, it is difficult to draw conclusions about the safety of its consumption. For sure, more research about its’ pharmacokinetics and its’ side effects is needed and for the time being a careful intake would be wise.