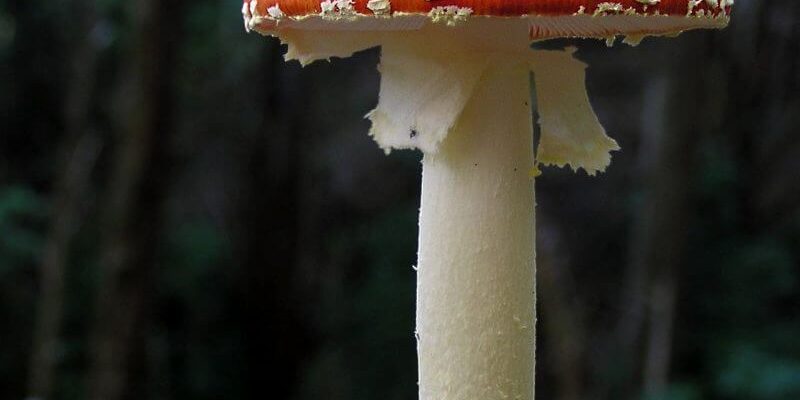 What is Amanita Muscaria

Amanita Muscaria, also called fly agaric or fly mushroom, is a basidiomycete mushroom of the genus Amanita. The original white-spotted red toadstool is one of the most recognizable mushrooms and is widely encountered in popular culture. Though it is generally considered poisonous, Amanita Muscaria is famous for its hallucinogenic properties, which had a religious significance in Siberian culture and possibly ancient India and Scandinavia.

Since medieval times, it has been used as an insecticide, from where it derives its name. Consuming more than about one gram of Amanita Muscaria can cause nausea and a number of other effects, depending on dosage, ranging from twitching to drowsiness, cholinergic effects (lower blood pressure, increase sweat and saliva), visual distortions, mood changes, euphoria, relaxation, and hallucinations. In near-fatal doses it causes swollen features and delirium, characterised by bouts of marked agitation followed by periods of quiet hallucination. These effects appear after around 60 minutes and typically peak within three hours, but certain effects can last for up to ten hours. The effect is highly variable and individuals can react quite differently to the same dose. In the United States, any sales of Amanita Muscaria for human ingestion are regulated by the FDA.

The mushroom is found frequently in pine forests, being easy to spot, because of its big red “hat” with white dots, reaching up to 20 cm in diameter. Although it’s considered as a poisonous mushroom, there have been very few deaths related to its consumption. Amanita Muscaria contains ibotenic acid (alpha-amino3-hydroxy-5-isoxazole acetic acid), muscamol (3hydroxy-5-aminomethy1 isoxazole) and possibly muscazone, with Muscamol appearing to be the primary active substance. A partial quantity of ibotenic acid decarboxylates into muscamol after ingestion, which causes the intoxication.

A “trip” on Amanita Muscaria is totally different from one on mescaline, LSD or psilocybin. Typical effects are (among others): distorted and/or altered hearing and taste, change of visual and sensory perception, total tranquility of mind and pure euphoria. Known side-effects are excessive salivation, ataxia and mild cases of increased transpiration.

Amanita Muscaria induces, just like magic mushrooms, an unpredictable high, sometimes mind boggling, and should only be ingested by experienced users. The duration of an Amanita Muscaria experience can be anything from 4 to 10 hours. Shamans traditionally used the sacred Amanitas for both spiritual and physical healing. In Kamchatka it is ingested in small quantities as a remedy for a sore throat. In the Western medicine the primarily reported effect is that it has a high potential as an analgesic. Usually the dried mushrooms are simply eaten, but they can be smoked as well.

The effects set in faster when smoked, but are of a shorter duration and generally less intense. Physician and mycologist Steven H. Pollock described for “J. Psych Drugs” in 1975, after taking a trip on Amanita, that “audition became enhanced and synesthesias became prominent with multi-modality overflow. I began to taste odors, to small tastes, and even to hear odors and tastes. Visual disturbances were almost non-existent, but I noticed frequent recurrent gustatory, olfactory and auditory flashes. Tactile sensation became markedly enhanced. Occasional moments of nausea occurred during the first two hours of the experience, but then the pseudo-delirium settled into a profound euphoric state of consciousness.

Equilibrium was affected as well, by ethyl alcohol throughout the intoxication, but mentation in contrast remained unimpaired. After six hours, though still under the Amanita influence, I retired for a night of sound sleep.” Many have searched for accurate descriptions of effects, but came to the conclusion that there are too many factors and inconsistencies to pin point exact effects. There are dramatic variances in potency between one mushroom and the next. There are also dramatic differences of fly agaric effects between one person and the next. Storage, habitat, drying, age when picked, etc, these all have an influence on the Amanita Muscaria effects.

Many people in Northern California reported that the mushrooms in their area are either much weaker than the specimen of northern Europe and Siberia.

For a first experience, 5 grams or less are an appropriate dose. From there, one can gradually increase the dose until the desired effect is reached.

Varying greatly from person to person, the first effects can be felt about 30 minutes after ingestion.

Ibotenic acid is active at 50-100 mg; muscimol is effective at 10-15mg (both values refer to oral ingestion).

Do not begin with Amanita as your first tripping experience. In fact, you probably never need to try these shrooms.

The effects of the Fly Agaric (Amanita) are unpredictable, and can be vastly different between people on the same brew. But, if you should try this mushroom, the safest way to prepare Amanita Muscaria for your shamanic trip is:

Step one: Getting about 5-10 grams of dried fungus, a coffee grinder or something similar, a candy thermometer, screen and coffee filter,and several cups of water in a small pot. First of all you must wash the mushrooms, then cut them in small cubes for slow drying (Once the Amanita is dried, it can last a long time if you seal it well and hold it in a refrigerator).

Step two: Then you need to dry them in an oven at a low temperature, 80-90 degrees Celsius (175-190 °F), checking on them every 30-40 minutes. The process may last up to 3 hours, until they get crispy and dry, turning the ibotenic acid (toxin) into muscimol (the desired chemical).

Step three: After that, grind them into powder, for slow simmering.

Step four: Using the candy thermometer, take the small pot with water and maintain the temperature to 175-190 °F (do not exceed).

Step five: Simmer the powder for about 20-30 minutes, stir frequently and watch the temperature (reduce or turn off the heat if necessary).

Final step: When it’s done, filter the “tea” through the screen and coffee filter, and that’s it.

A friendly reminder though. If they are eaten raw, without a detoxification process they can be very dangerous, and there is no remedy.

Effective Aug 8, 2005 (signed into law Jun 28, 2005) Louisiana Act No 159 makes 40 plants illegal, including Amanita muscaria, when intended for human consumption. The law specifically excludes the “possession, planting, cultivation, growing, or harvesting” of these plants if used “strictly for aesthetic, landscaping, or decorative purposes.” (Text of HLS_05RS-52 and Update June 2005)

Tennessee did not pass the proposed bill that would have banned dozens of plants as “hallucinogenic” when intended for human consumption. Instead, they banned only Salvia divinorum. See Comments on New State Laws Controlling the Consumption of Hallucinogenic Plants.

Chemistry and Effects of Entheogenic Amanita Species by J. Ott

Mycopharmacological Outline and Personal Experiences by F. Festi & A. Bianchi

Excerpt on Amanita muscaria from “The Hallucinogens” by A. Hoffer & H. Osmond

This article is based on the following pages: