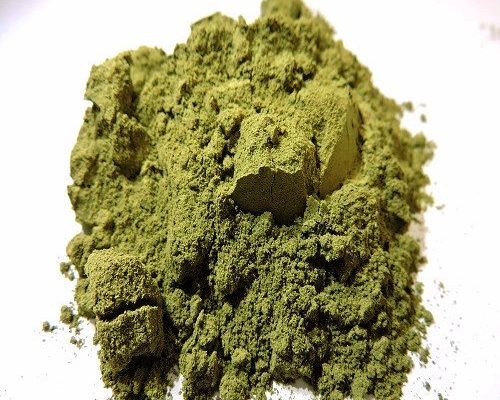 Kratom, also known as Mitragyna Speciosa, Kratum or Keetum, is an evergreen tree, from the same family as the coffee tree (Rubiaceae), indigenous to Thailand, Indonesia, Malaysia, Myanmar and Papua New Guinea, where it has been used in traditional medicine since at least the nineteenth century, as a substitute for opioid painkillers, a sleep aid or as a recreational drug. The tree can grow to a height of 25 m (82 ft) tall, the trunk may grow to a 0.9 m (3 ft) diameter. The leaves are dark green and glossy, and can grow to over 14–20 cm (5.5–7.9 in) long and 7–12 cm (2.8–4.7 in) wide when fully open. Its leaves produce a psychoactive effect which can range from stimulation to sedation, sometimes even both. The use of kratom goes back several thousand years, it has a long history of human usage and is legal in many countries, being available mostly in online shops and some random stores or even gas stations. It was first formally documented by Dutch botanist Pieter Willem Korthals in the early 19th century. Given the fact that it grew in distinctly different areas, the plant has evolved to adapt to its environment, developing different types of strains, effects ranging between leafs of each strain.

If you are new to kratom and are just learning, there is a lot of information out there and the majority of it is confusing. For one, you have all these options in front of you and it is really hard to choose a strain if you have no idea what to expect or what each strain helps you with. The most common misconception about kratom is it being mistaken for a “legal high”. There are different varieties of Mitragyna Speciosa strains available for purchase. Reputable vendors use the standard names for strains. The names for kratom leaves cosist of the country the tree is from, the region the plant was picked and the color of the leaves veins. For example “Green Vein Indo” would tell the user that the product is from a green veined leaf from a tree in Indonesia. The difference between red, green or white veins leaves are as follows:

These are your sedating strains. After the initial rush of energy, the calming effects take over. Red vein is often used for pain relief and as a substitute for opiate detoxing.  Some users report that it gives them a euphoric feeling.

The Green and White veins leaves:

These are the energetic strains, the white ones being slightly higher in energy. These leaves produce more stimulating effects than red vein varieties. Green vein leaves are known for providing clearer thinking as well as extra endurance, and is preferred by active people, such as athletes and labor workers. Some users have reported that green vein leaves have been useful for anxiety and depression symptoms.

The most popular of kratom strains are:

Green Malaysian – This is a very popular strain. Green Malaysian is a long lasting energizing strain. It is easier than some other strains to take due to its pleasant taste. It is considered on the more euphoric side of the effect scale. When taken, the kratom effects can last up to 8 hours for a beginner and around 3-4 hours for an experienced user.

Bali – Bali kratom effects are both relaxing and energizing. Higher doses of bali kratom tend to be more relaxing, while lower doses produce stimulating effects. For a new user, the kratom effects can last around 5-6 hours. Experienced users may feel the effects for around 3 hours.

Red Vein Bali – This strain is also known for its balanced alkaloid content. It has a unique taste and is a bit more sedating. Red Veined Bali is often used for pain relief due to its sedating effects. It is also effective for opiate detoxing.

Green Vein Bali – Green-Veined Bali is found in Borneo and Sumatra. It has a high alkaloid level that resembles Maeng Da. This Mitragyna Speciosa strain is becoming popular because of its balanced level of alkaloids. The kratom effects are said to be both relaxing and slightly stimulating with waves of euphoria. A perfect balance of energy and sedation.

Thai – Thai kratom is known for energizing effects and as a sexual stimulant. It lasts for about 4-6 hours. Because Mitragyna Speciosa trees were banned in Thailand in 1943, Thai strains are grown in other countries, such as Malaysia and Indonesia.

There is a big variety, a big number of kratom strains, but in this article I am only focusing on the Malay strain, the Green Malaysian Kratom, one of the strongest strains.

The Green Malaysian Also known as Super Green Malaysian, Premium Malay, SGM, the Green Vein Malaysian is very well known and a pretty unique strain, with potency almost rivaling that of Maeng Da (Thai), and it is well-rounded, long lasting,  and energetic. The leaves of Malay Kratom are typically oval shades and have a dark green color, with an average size of 100-180 mm width and length. The veins of Malay Kratom leaves are either greenish-red or greenish-white with the latter being more potent.

Green Malaysian has long been known as one of the longest-lasting strains due to leaf cell-wall density. Many people have remarks on this strain’s unique nootropic effects, which, despite heavy stimulation, can increase focus and patience for quite long periods of time. Interestingly, these effects are typically only noticed in retrospect due to its smooth character of effects. It helps in relieving chronic pain and aiding problems like osteoporosis, backache, migraine, etc. The most commonly found alkaloid in Malay Kratom leaves is Mitragynine, which is not soluble in water but is soluble in traditional organic solvents. The leaves of Malay Kratom act as powerful antioxidants, enhance the human body’s immunity and fight off damaged cells. Malay Kratom is useful for fighting off various cancers, and users have reported a boost in their chemotherapy results after simultaneously taking it. The alkaloids in the leaves are necessary to enhance mood and improve one’s health and balance hormones. When a user consumes Kratom, in whatever form, the effects that place usually happen simultaneously, meaning that shortly after eating or drinking Kratom, the user will experience euphoria (depending on the type of Kratom) alongside a boost in energy, an increase in appetite, relief from pain, etc. The problem with experiencing all these effects together is that they all go away together when the effects subside. Its main effect is to give energy, a boost in senses and a feeling of heightened happiness, joy or euphoria, as well as relief from chronic pain. The people suffering from a lack of concentration, boredom at work, anxiety, stress, and depression can use it to fix these issues. Naturally, it is the perfect strain for workaholics or professionals or even students. Also those suffering from chronic pain such as arthritis, osteoporosis, migraines, backaches, sciatica, etc. can significantly benefit from Green Malay Kratom pain relief properties. The effects of green Malay Kratom are the most long-lasting, which means extended relief from pain, heightened concentration and a boost in mood.

A gram is the minimum dosage of Green Malay Kratom, whereas users say that 10 grams are the maximum dosage that a person can enjoy. Anything more than 10 grams in a day can be harmful to the human body. Reports from users show that the typical strain of green Malay Kratom ranges from 2 – 6 grams, with the most commonly reported dosage being of 2.5 – 4 grams. Keep in mind that smaller doses result in a more energetic experience, while larger doses tend to produce more calming and slow-speed effects. Green Malay Kratom dosage can also be taken according to one’s weight. If your weight is less than 70 kg or 150 pounds, then you should consume 2 – 3 grams per day. If your weight between 150 – 200 pounds, then you should take 3 – 4 grams per day, which amounts to 1.5 – 2 teaspoons a day. For those weighing more than 200 pounds, it is recommended that they start with 5 grams of kratom, which is equal to two and a half teaspoons of Green Malay kratom. These dosages are for those who are not very sensitive to kratom and are suitable for those wishing to experience milder effects. A precaution that one has to take with Green Malay kratom, due to its high potency, is not to take it on an empty stomach. Always eat something and take it one hour after eating, so that it does not sit on an empty stomach because this can lead to nausea, vomiting, dizziness and lack of concentration. If you do wish to take it on an empty stomach, the dosage should be 2 grams.

There are a few popular methods of using powdered leaf, but the most common are “toss and wash“, mixing with food, and preparation as a tea. Even soap, or capsules can be made of kratom. But first of all, the leaves must be turned into powder. You can simply crunch up the leaves in your bare hand, being careful to collect the resulting dust on a piece of paper laid out on the table. You can also add dried leaves to an empty pepper mill (preferably a new one so no remnants of other spices remain), and grind them into a powder, or a small food processor or blender can accomplish the task well, though be sure to account for some kratom dust getting stuck to the blades. Here are some simple usage metods:

Before you decide to jump in and give Kratom a try, it is important that you know what to expect from this botanical. Kratom effects can seem contradictory to the uninformed user. If more than 10 grams of Green Malay Kratom taken in one day, its adverse effects include slurred speech, difficulty in keeping track of thoughts, jitteriness, fidgeting and inability to concentrate on one thing. It can also make one extremely hyper, excessively talkative, nauseous or dizzy, especially if one suffers from vertigo or chronic migraines. Other users have reported excessive itchiness, sweating and red rashes on their legs. This is why, unless you are extremely tolerant, not more than 10 grams of Green Malay Kratom should be taken in a single day.

The users of Kratom strains recommend the use of Green Malay strain to experience a feeling of wellness and be able to go about your daily chores with a great amount of mental alacrity and soundness. However since the market is rife with a few adulterated varieties, it is often wise to check claims before making a purchase. Green Malay Kratom, if used wisely, is not only light for your pocket but also promises a host of other benefits as well.