Home » Legal Status of Salvia Divinorum in the United States

Salvia divinorum does not have any of the characteristics that typically lead a substance to be regulated by the U.S. government. Existing research shows that salvia is non-toxic and non-addictive. However, since the beginning of the 21st century, there has been increasing effort to make Salvia divinorum illegal. The pressure to regulate Salvia divinorum in some way has grown with the emergence of salvia in pop culture, through social media and celebrity endorsements. In the absence of evidence that salvia may be a danger to society, it is likely that the lawmakers seeking to outlaw salvia are acting out of a general fear of the psychedelic experience.

In the United States, there is no federal regulation of Salvia divinorum. Federal regulation of drugs in the United States occurs when the drug is “scheduled” by the Drug Enforcement Agency (DEA) or Food and Drug Administration (FDA), under the Controlled Substances Act (CSA). A bill to schedule salvia under the CSA was introduced into the 107th congress of 2002 by Democrat representative Joe Baca of California, but the bill was not acted on and Baca did not re-introduce the bill in the 108th congress. Baca claimed that he only introduced his bill to “raise awareness” of Salvia divinorum. His actions caused many groups, mostly organized via the Internet, to lash out against the congressional actions and become very vocal in opposing the proposal. Grassroots campaigns to keep Salvia divinorum legal may have been a major factor in Baca’s decision to abandon the bill.

In 2007, the DEA began researching salvia to determine whether or not it should be scheduled as a controlled substance. The CSA requires an eight-point analysis of the substance in question to evaluate the potential risk to public health. As of 2012, the DEA has not moved forward with scheduling Salvia. 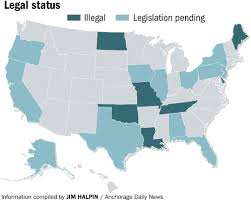 While salvia remains legal in the eyes of the federal government, after the failed Congressional bill of 2002, state legislators began taking matters into their own hands. Legislation regulating Salvia divinorum has been introduced in thirty-nine U.S. states. Regulations span from imposing fines for possession, to outlawing sales to minors, to scheduling the Salvia as a controlled substance. These measures have passed in 27 states. Legislation regarding Salvia has rarely passed through congressional bodies on the first try. Many of the laws were not accepting until three or four similar bills failed before them.

States in which Salvia divinorum is regulated:

The laws concerning Salvia divinorum are unclear and constantly changing. Some states have several bills in progress simultaneously that include regulations on salvia. It may be several more years before the dust settles and the government’s position on salvia becomes clear. To make things even more confusing, there are documented incidents of the DEA and other government bodies seizing inventory from both online and brick and mortar vendors. These seizures may occur without charges being pressed, but the dramatic losses drive vendors out of business and cut off supplies to consumers. Clearly, the written law does not always dictate government action, so caution and common-sense is necessary even when actions are technically legal.

It is possible for participants in Salvia divinorum use to remain within the law in the United States, but the atmosphere is so cloudy that it is definitely advisable for anyone possessing salvia to act responsibly and avoid drawing attention. Salvia for sale is available for purchase in our online store.